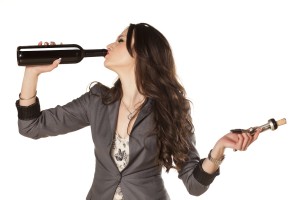 Brooke is a first-year law student. After four years of long-term recovery, she relapsed. She is back in recovery, while also continuing to pursue her law school studies. Here is her story and the lessons she learned.

February 15, 2014, was the day I got on my knees in my living room and did exactly as my sponsor directed me to do to.  I was desperate, tired, detoxing, and in fear of losing custody of my daughter in the middle of a contentious divorce.

My sponsor guided me in reciting the 3rd step prayer and as each word came out of my trembling body, I felt a little bit lighter. I had been in and out of the doors of AA for years, but for some reason that night, it finally stuck. I believe it finally resonated because I had truly reached my bottom. I was out of options, and the thought of losing my daughter was the “gift of desperation” that I needed.

I had always been skeptical of AA, and admit to this day that I believe it is an outdated approach to a disease that continues to evolve in modern times.  But that day, I was out of choices. I had tried my way over and over, and it wasn’t working.  I did exactly as my sponsor instructed me to do. I sent her daily gratitudes, meticulously went through each of the steps of AA, attended meetings every day, began to sponsor others, and started to put my life back together.  Within one year, I went from 50/50 custody of my daughter to full custody. The “promises” that AA assured would happen in my life began to take shape.

I started my own PR company, I traveled often, I moved back to Los Angeles (where I had wanted to live before my divorce forced me to relocate to San Francisco to share custody), and I was genuinely beginning to feel whole again.

I decided that it was time to pursue my life-long dream of going to law school to become a lawyer and legal journalist. Getting into law school itself was a new feat that brought on the stresses of the LSAT, essays, and letters of recommendation.  As an entrepreneur and working single mother with no outside help, I knew my status as a non-traditional student would make the journey to law school all the more difficult, but I was up for the challenge.

Little did I know that as I slowly moved away from speaking to my sponsor every day and attending AA meetings, that I’d lose my sobriety date in the midst of starting my first year of law school.

No one tells you that when you start law school you sacrifice all the normalcies of your previous life to put in so much time to reading, studying, briefing, writing, analyzing, memorizing, and essentially living and breathing case law, so that there’s little room for anything else.  Being the obsessive person that I am, I applied to a two-year accelerated program rather than the traditional three-year program.

The first week of law school, all I was trying to do was understand what to expect, how to study, how to possibly get in the exorbitant amount of reading required, how to glean the important information, and how to navigate the enormous amount of stress and pressure in our law school classroom. 2Ls would ask, “So who’s the gunner in your class?”  “The gunner?” I’d say.  Was I supposed to be the gunner?  Was I doing enough?  How was I going to make it all work?  I looked around our class and realized that we were all “gunners” — eager to speak, looking to impress our professors, “gunning” for the best grades in the class which would ultimately determine our future externship placements, scholarships and job placements. Competition is stiff in law school. I’d say more so than in any other graduate program out there.  And the majority of the students in my accelerated class didn’t have a company to run, nor were they taking care of a six-year-old all by themselves.

The first couple of weeks the work piled on, the nights were long, and I worked to settle into a routine for my daughter and myself.  I’d drop her off at school, go to class, pick her up, make her dinner, bathe her, put her to bed, read/study for four hours or more, and repeat.  And those were the easier days, when the routine went as planned.

No one prepares you for the extra papers, random quizzes, extra assignments, much-needed TA review sessions, or the amount of stress that swirls in the rooms as the pages of reading pile up.

A much-needed weekend was around the corner my second quarter in.  I hadn’t been to an AA meeting since I started law school (there was just no time), and I decided that a beer while I watched one of my favorite television shows wouldn’t hurt.

In reality, I had been making that reservation to drink long before that weekend. The idea popped into my mind the first time all of my law school friends decided to hit the corner bar after our first week of school. After a stressful week, when Friday came around, cocktails were on everyone’s mind… so much so that the weekly Friday bar jaunt became a routine for my law school classmates.  Id’ join for a bit before I had to pick up my daughter — partake in a soda water and lime and head out.  The soda water and lime became a “virgin margarita” or a “non-alcoholic beer,” and before I knew it, I was grabbing a six-pack of Corona on my way home one weekend, to be able to finally relax alone in the comfort of my home without any of my classmates ever having to know…

But as true alcoholics know, it’s never just one beer or a six-pack.  My second quarter of law school, my relapse kept me out for four days of classes. I felt guilt, shame, and was afraid I might have missed too many classes to get back on track.  I quickly reached out to my sponsor and others in the program and asked for help.  I got back to school immediately to catch up on my work, and I found that the Dean at my law school was there to help rather than reprimand or shame me.

“Relapse is a part of recovery,” they say… but those couple of days back in class brought the stigma and handcuffs of guilt that haunt many in recovery. I worried about what my classmates may think, if I could still remain on top in my studies, or if I had ruined my reputation…

Then I forgave myself and I let go as I did that day I got on my knees. I was grateful my relapse didn’t end in my losing my place in law school or my losing myself. I had to put it all in perspective and learn to take it one day at a time again. I went to a meeting that night, found some meetings for those in the legal field, and have started back on my steps.  After experiencing my first relapse in three-and-a-half years in my first year of law school, I realized that while my law school career takes work and priority, my sobriety must always come first. And today, it’s okay if I don’t get all of the reading done or my analysis in my essay isn’t perfect. I can handle it all if I reach out for support and I take it one day and one step at a time.

Brian Cuban (@bcuban) is The Addicted Lawyer. Brian is the author of the Amazon best-selling book, The Addicted Lawyer: Tales Of The Bar, Booze, Blow & Redemption (affiliate link). A graduate of the University of Pittsburgh School of Law, he somehow made it through as an alcoholic then added cocaine to his résumé as a practicing attorney. He went into recovery April 8, 2007. He left the practice of law and now writes and speaks on recovery topics, not only for the legal profession, but on recovery in general. He can be reached at brian@addictedlawyer.com.