I Will Never Forget Frida and Menashe Sterenberg 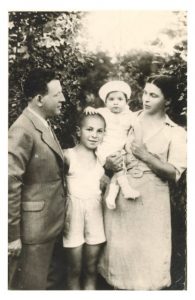 Fifteen years ago, I came across old photos belonging to my mother. One was a photo of a man and women with what appeared to be their two young children. I asked my mom who they were. She said,

“That is your grandfather’s (Fred) sister, husband, and children. They were murdered in the Holocaust.”

What? I did not know my grandfather had a sister. I didn’t realize we had relatives lost in the Holocaust. My grandfather died in 1983. A stroke had taken away much of his vocal ability. Before that, we had never discussed his family in the “old country.”  I was aware we had relatives in Israel. I met one of them when I was a child.

When I asked my mom to tell me more about the photo, she related that Fred had two other brothers. Yosef, who immigrated to Palestine, which would, of course, would later become Israel, and Louis or “Levi” who had lived in NYC. I had many questions. Were more of my family murdered in the Holocaust? Where the smiling couple and children in the photo even my family? What were the children’s names? How did they die? My mom had no answers.

Over the years, I made efforts to start a family tree. It was difficult without the starting point of a living person on that side of the family who I could speak with about the photos. My mother is an only child. Her mother had an extended family, but they were unable to help. Fade memories. Dead ends. I became resigned that I may never solve the mystery.  I imagined how they may have died. In a ghetto or concentration camp. Shot in the back of the head and jumped into a mass grave. A death camp gas chamber.

Fast forward to 2012. I had not forgotten the photo. I would pull it out of my desk now and then. I would focus on the eyes and facial expressions. What were they thinking at the moment the photo snapped? Did they know the fate that awaited them?

There was a clue. Yiddish writing on the back of the photo. I had it translated. It read, “Murdered by the Nazis.” Nothing to tell me who they were. I asked my mom to send me the rest of her old photos. Another photo of the couple and children. Pictures of family in Israel. There had to be living relatives who know the truth. How do I contact them? Why didn’t we stay in touch? I decided to start at the beginning.

Re-creating family history was like putting together the pieces of a giant jigsaw puzzle without knowing what it would look like completed. Early on, it was successful. I obtained information on my grandfather and his middle brother, Louis. Many records were on Ancestory.com The oldest brother, Josef was more difficult. He left the town they were all born in Noua Sulita, Romania, and emigrated to Palestine.

Fast forward to 2013. I was able to track down a Boston relative on the side of Fred’s brother Louis. His granddaughter. What do I do now? I was so nervous! I wrote out my script.

“Hi, I am Brian Cuban, my grandfather is Fred Feldman. His brother was Louis Feldman, your grandfather. We are related.

I called. As one might expect, she was skeptical. Some guy calling unexpectedly, and claiming blood relation.  I thought I had hit another roadblock. I expressed my disappointment to my brother Jeff. He pointed out that it was probably a big shock. I should relax. I would hear from them.

Jeff was right. Two weeks later, the phone rang. It was the granddaughter of Lewis. We had a pleasant conversation. We exchanged the photos we had. Then the big Holocaust reveal. She sent me, among other images, the exact same picture I had of the unidentified couple and their children. Like mine, there was Yiddish writing on the back of her photo. I had it translated. It said,

My big break, Fred’s brother, Yosef sent the same photo to him and Lewis as a remembrance of their sister Frida. I had made the Holocaust connection. I had a great aunt. Her name was Frida Feldman-Sterenberg. Her husband was Dr. Menashe Sterenberg. Their children were Raya and Yitzhak.

Once I had the names, dominoes fell. I accessed the Yad Vashem Holocaust Testimony database. There were several Holocaust testimonies for Frida and family including the circumstances of their deaths. Here is what I learned so far about their short lives.

Fast forward to 2019. I received an email from a person who saw this story posted in a facebook group related to Noua Sulita Romania.  His father knew and worked with Menashe.  He had more information about his life and death. Here is the relevant part of the email:

“The reason I decided to write to you is that Dr. Menashe Shterenberg was a very good friend of my father Dr. Nisan Pesach and they both worked together in Novoselitza after the Russain occupation in 1940.”

My father was a big patriot of Novoseltza and published a number of books about this very famous Jewish shtetel, which inhabitants were murdered by Nazis and which does not exist anymore. In his first book he describes how in summer of 1946 he and my Mom Esther tried to find the body of my murdered grandfather (who was brutally killed on July,5 1941 by local Romanians). Before they found my grandfather, few weeks earlier they found a body of a man, who was keeping a body of small child and there was a phonendoscope in the remaining’s of his clothes… As my dad wrote, “That was all what remained from our dear friend Menashe Shterenberg and his lovely daughter Rayechka… His wife lost her mind and perished in Transnistria together with their son Yzia (Yitzhak)“.

Now the story is as complete as it will ever be. My great aunt’s husband and their son Raya were one of the over 800 Jews murdered during the summer of 1941.  They are buried in a mass grave just outside of Noua Sulita (Below).   My great aunt and their son Yitzah died in one of the Transnistria concentration camps.

The soldiers who murdered my family may have died later in the war. They may have survived and lived the full lives they denied my family and many others. I will never know. They will remain nameless, faceless, murderers, relegated to the images I give them. I sometimes relive the pain, fear, and desperation Menashe, Frida and family must have felt.  I take some comfort knowing that as long as I live and tell their stories, their memories will carry on.  I hope that one day I will make the journey to Noua Sulita and tell them I have not forgotten.

I will never forget my great aunt Frida Feldman-Sterenberg, Menashe Sterenberg, Yitzhak Sterenberg and Raya Sterenberg who were among the eleven million murdered in the Holocaust. I hope you won’t either.